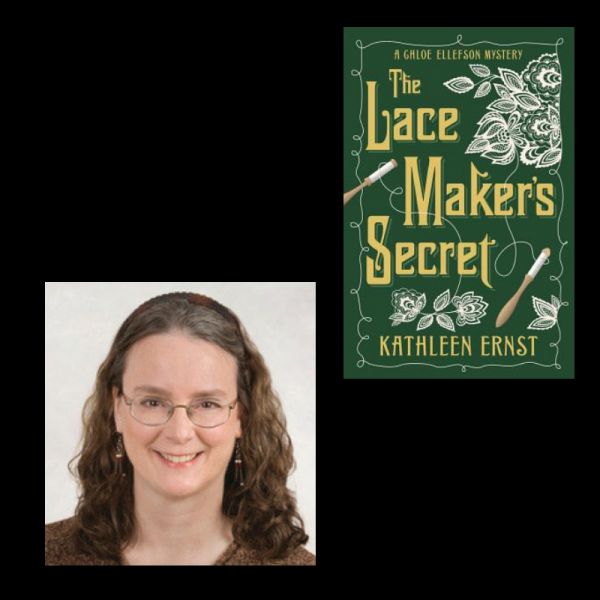 Area favorite Kathleen Ernst is returning to Books & Company with her newest book in the Chloe Ellefson mystery series The Lace Maker's Secret!

Curator Chloe Ellefson needs distraction from the unsettling family secret she's just learned. It doesn't help that her boyfriend, Roelke McKenna, has been troubled for weeks and won't say why. Chloe hopes a consulting job at Green Bay's Heritage Hill Historical Park, where an old Belgian-American farmhouse is being restored, will be a relaxing escape. Instead she discovers a body in a century-old bake oven. Chloe's research suggests that a rare and valuable piece of lace made its way to nearby Door County, Wisconsin, with the earliest Belgian settlers. More importantly, someone is desperate to find it. Inspired by a courageous Belgian woman who survived cholera, famine, and the Great Fire, Chloe must untangle clues to reveal secrets old and new . . . before the killer strikes again.

Kathleen Ernst is an award-winning and bestselling author, educator, and social historian. She has published over thirty novels and two nonfiction books. Her books for young readers include the Caroline Abbott series for American Girl. Honors for her children's mysteries include Edgar and Agatha Award nominations. Kathleen worked as an Interpreter and Curator of Interpretation and Collections at Old World Wisconsin, and her time at the historic site served as inspiration for the Chloe Ellefson mysteries. The Heirloom Murders won the Anne Powers Fiction Book Award from the Council for Wisconsin Writers, and The Light Keeper's Legacy won the Lovey Award for Best Traditional Mystery from Love Is Murder. Ernst served as project director/scriptwriter for several instructional television series, one of which earned her an Emmy Award.

A Settler's Year: Pioneer Life through the Seasons (Hardcover)

Gunpowder and Tea Cakes: My Journey with Felicity (Paperback)

Secrets in the Hills: A Josefina Mystery (Paperback)