BUD SELIG IN CONVERSATION AT THE SHARON LYNNE WILSON CENTER 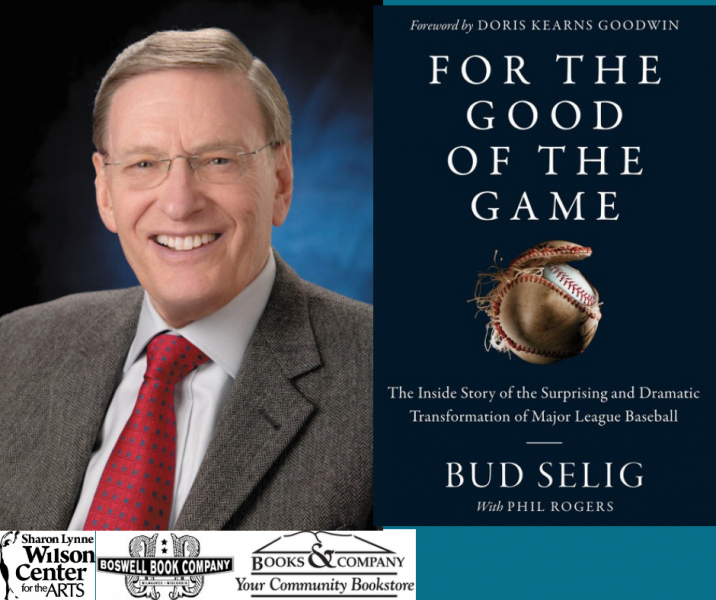 Boswell Book Company, the Sharon Lynne Wilson Center for the Arts, and Oconomowoc's Books and Company present Bud Selig, longtime Commissioner of Major League Baseball and former Milwaukee Brewers President, to discuss his new book, which provides an unprecedented look inside professional baseball today, For the Good of the Game: The Inside Story of the Surprising and Dramatic Transformation of Major League Baseball. Bud Selig will be in conversation with Tom Haudricourt of the Milwaukee Journal Sentinel.

VIP tickets, which include a copy of For the Good of the Game and entry to the signing line after the talk, cost $28.99 plus tax and ticket fee, available at seligwilson.bpt.me
Limited free registration, which includes admission but not signing line entry, is also available.

Selig takes fans inside locker rooms and board rooms and offers an intimate, fascinating account of the frequently messy process involved in transforming an American institution. He also speaks candidly about hotbutton issues, including the steroid scandal that threatened to destroy the game, telling his side of the story in full and for the first time. With a focus on how he helped bring the game into the modern age, Selig reveals his interactions with players, managers, fellow owners, and fans nationwide and explores the most difficult decisions and moments of his career, looking at how he worked to balance baseball's storied history with the pressures of the twenty-first century to ensure its future. As he looks back and forward, Selig outlines the stakes for baseball's continued transformation, and why the changes he helped usher in must only be the beginning.

The revelations include: His true feelings about Barry Bonds breaking Henry Aaron’s homerun record, The unlikely vote that blocked Milwaukee from getting an expansion team in ‘67, The first drug crisis in baseball--before steroids, PED’s and HGH infected the game, How he instituted the luxury tax and profit sharing, giving small market teams a chance—and the resistance he faced in the process, Revolutionizing the game with the addition of the Wild Card—revealing the one owner who voted against the change, The Hall of Fame manager that persuaded Selig to expand instant replay usage in the field and the one botched call that sealed the deal

Bud Selig, the former President of the Milwaukee Brewers and the ninth Commissioner of Baseball, is a major supporter of his alma mater, the University of Wisconsin-Madison, as well as Marquette University. He teaches a baseball history course at the University of Wisconsin and is also a lecturer in sports law at Marquette University and the Sandra Day O'Connor College of Law at Arizona State University in Tempe, AZ. A life-long baseball fan and long-term baseball executive, he’s known for contributions to America’s Pastime including reform of the economic structure of the game, as well as labor and drug-testing policies. Tenured for more than two decades, he lives with his wife, Sue, and they have three daughters.

Click here for a great interview with the New York Times!

For the Good of the Game: The Inside Story of the Surprising and Dramatic Transformation of Major League Baseball (Hardcover)