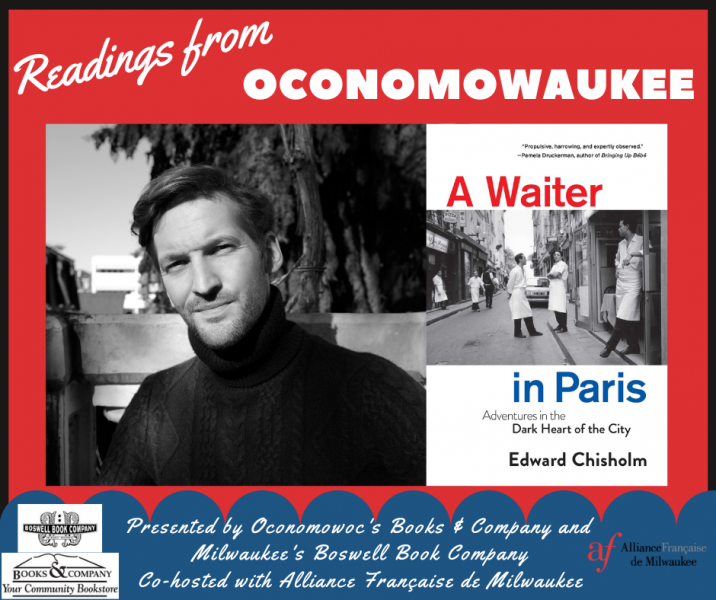 Join Boswell Book Company and Books & Company for our February Readings from Oconomowaukee event, cohosted by Alliance Française de Milwaukee. This month will feature Edward Chisholm in conversation with Daniel Goldin and Lisa Baudoin, for Chisholm's memoir A Waiter in Paris: Adventures in the Dark Heart of the City- an evocative portrait of the underbelly of contemporary Paris as seen through the eyes of a young waiter scraping out a living in the City of Light.

A waiter's job is to deceive you. They want you to believe in a luxurious calm because on the other side of that door . . . is hell. Edward Chisholm's spellbinding memoir of his time as a Parisian waiter takes you beneath the surface of one of the most iconic cities in the world--and right into its glorious underbelly. He inhabits a world of inhuman hours, snatched sleep and dive bars; scraping by on coffee, bread and cigarettes, often under sadistic managers, with a wage so low you're fighting your colleagues for tips. Your colleagues--including thieves, narcissists, ex-soldiers, immigrants, wannabe actors, and drug dealers--are the closest thing to family that you've got. It's physically demanding, frequently humiliating and incredibly competitive. But it doesn't matter because you're in Paris, the center of the universe, and there's nowhere else you'd rather be in the world.

Edward Chisholm was born in England and moved to Paris after graduating from the School of Oriental and African Studies in London. A resident in the City of Lights for seven years, Chisholm spent the first four of them working all manner of low-paid restaurant jobs, from waiting and bartending, while trying to build a career as a writer. Now Chisholm makes a living as a freelance writer. His work has appeared in the New York Times, the Guardian, and the Financial Times magazine. He lives in England.

A Waiter in Paris: Adventures in the Dark Heart of the City (Hardcover)