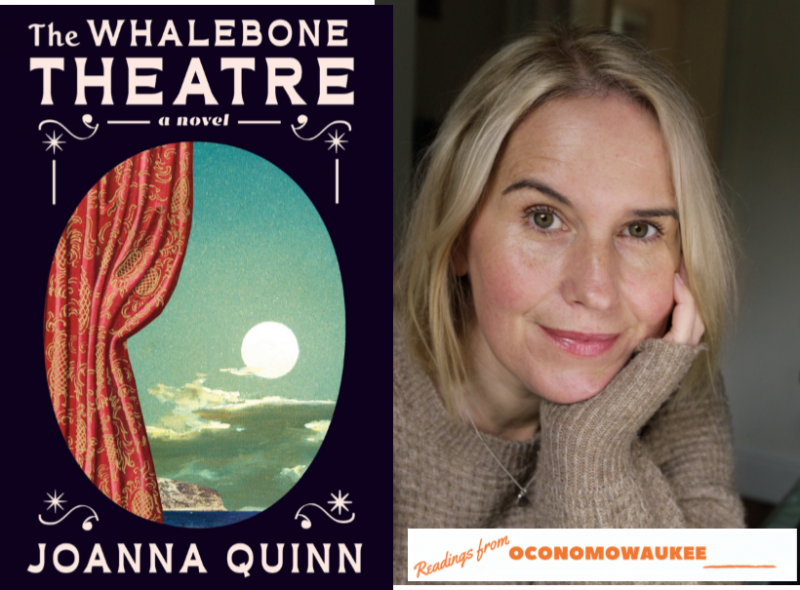 Readings from Oconomowaukee presents its October edition featuring Joanna Quinn joining us virtually from the UK for a conversation about The Whalebone Theatre, her irresistible debut novel that takes its heroine from the gargantuan cavity of a beached whale into undercover operations during World War II and through a story of love, bravery, lost innocence, and self-transformation.

About the book:
One blustery night in 1928, a whale washes up on the shores of the English Channel. By law, it belongs to the King, but twelve-year-old orphan Cristabel Seagrave has other plans. She and the rest of the household--her sister, Flossie; her brother, Digby, long-awaited heir to Chilcombe manor; Maudie Kitcat, kitchen maid; Taras, visiting artist--build a theatre from the beast's skeletal rib cage. Within the Whalebone Theatre, Cristabel can escape her feckless stepparents and brisk governesses, and her imagination comes to life.

As Cristabel grows into a headstrong young woman, World War II rears its head. She and Digby become British secret agents on separate missions in Nazi-occupied France--a more dangerous kind of playacting, it turns out, and one that threatens to tear the family apart.

About the author: JOANNA QUINN was born in London and grew up in Dorset, in the southwest of England, where her debut novel, The Whalebone Theatre, is set. She has worked in journalism and the charity sector. She is also a short story writer, published by The White Review and Comma Press, among others. She teaches creative writing and lives in a village near the sea in Dorset.

The Whalebone Theatre: A novel (Hardcover)