JODI PICOULT- IN PERSON TICKETED AUTHOR EVENT AT THE OAC 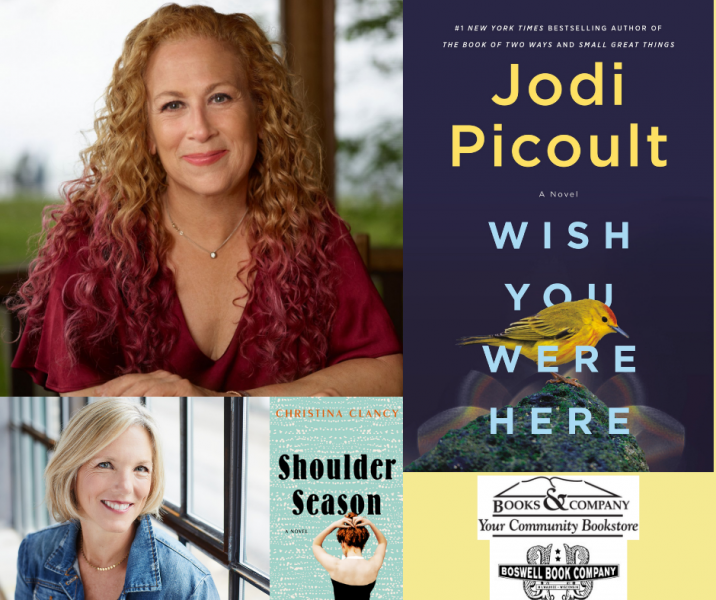 Milwaukee's Boswell Book Company and Oconomowoc's Books & Company Present New York Times bestselling author, Jodi Picoult for her new novel, Wish You Were Here -a powerfully evocative story of resilience and the triumph of the human spirit" (Taylor Jenkins Reid, author of Malibu Rising) Jodi Picoult will be in conversation with Christina Clancy, author of Shoulder Season and The Second Home.

Tickets are $35 and the price includes a signed copy of Wish You Were Here.

Vaccine Cards and Masks are Required. Masks must be worn at all times inside. Please note that per the publisher, a recent COVID test will not be accepted in lieu of vaccination.

Books will be pre-signed. Ms. Picoult will not be signing after the event.

About the book: Diana O'Toole is perfectly on track. She will be married by thirty, done having kids by thirty-five, and move out to the New York City suburbs, all while climbing the professional ladder in the cutthroat art auction world. She's an associate specialist at Sotheby's now, but her boss has hinted at a promotion if she can close a deal with a high-profile client. She's not engaged just yet, but she knows her boyfriend, Finn, a surgical resident, is about to propose on their romantic getaway to the Galápagos--days before her thirtieth birthday. Right on time. But then a virus that felt worlds away has appeared in the city, and on the eve of their departure, Finn breaks the news: It's all hands on deck at the hospital. He has to stay behind. You should still go, he assures her, since it would be a shame for all of their nonrefundable trip to go to waste. And so, reluctantly, she goes. Almost immediately, Diana's dream vacation goes awry. Her luggage is lost, the Wi-Fi is nearly nonexistent, and the hotel they'd booked is shut down due to the pandemic. In fact, the whole island is now under quarantine, and she is stranded until the borders reopen. Completely isolated, she must venture beyond her comfort zone. Slowly, she carves out a connection with a local family when a teenager with a secret opens up to Diana, despite her father's suspicion of outsiders. In the Galápagos Islands, where Darwin's theory of evolution by natural selection was formed, Diana finds herself examining her relationships, her choices, and herself--and wondering if when she goes home, she too will have evolved into someone completely different.

About the authors: Jodi Picoult is the #1 New York Times bestselling author of twenty-seven novels, including The Book of Two Ways, A Spark of Light, Small Great Things, Leaving Time, The Storyteller, Lone Wolf, Sing You Home, House Rules, Handle with Care, Change of Heart, and My Sister's Keeper, and, with daughter Samantha van Leer, two young adult novels, Between the Lines and Off the Page. Picoult lives in New Hampshire.

Christina Clancy is the author of Shoulder Season and The Second Home. Her writing has appeared in the New York Times, The Washington Post, The Chicago Tribune, The Sun Magazine and in various literary journals, including Glimmer Train, Pleiades and Hobart. She holds a PhD in Creative Writing from the University of Wisconsin-Milwaukee, and lives in Madison, WI with her family.

Wish You Were Here: A Novel (Hardcover)

The Book of Two Ways: A Novel (Paperback)

A Spark of Light: A Novel (Paperback)

My Sister's Keeper: A Novel (Paperback)

Handle with Care: A Novel (Paperback)

Sing You Home: A Novel (Paperback)

The Second Home: A Novel (Paperback)