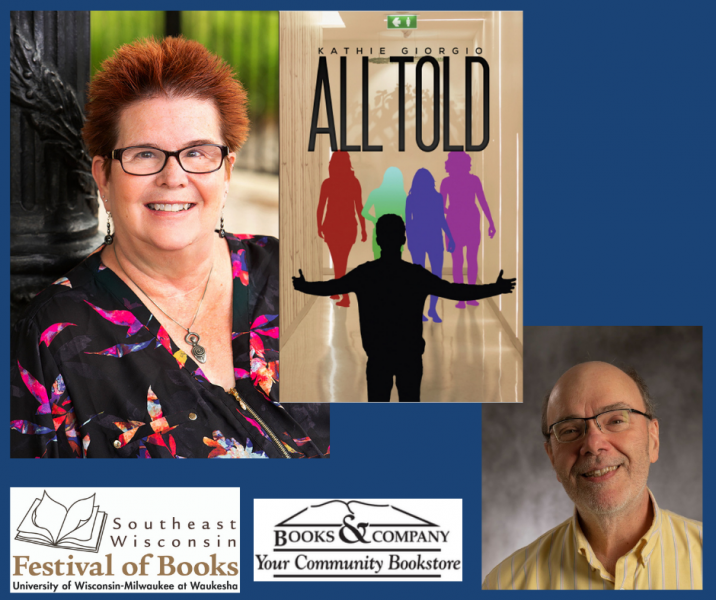 Join Books & Company and the Southeast Wisconsin Festival of Books for a virtual event with Kathie Giorgio for her latest novel, All Told. This virtual event is the wrap up to the Festival's 2021 season.

About the book: Imagine being an “other woman,” and then finding out that you’re not the only one. There have been many other women, before you and even standing alongside you right now. Jack learned early that one is never enough. Each chapter tells the experience of someone affected by Jack’s trysts. Some of the women are married, some single, some divorced. The ages vary as Jack grows older. Then the reach goes further, to the ripple effect of hurt caused by infidelity. There is an adult son Jack never knew he fathered. There’s also a bartender on the cusp of meeting the woman of his dreams, only to have Jack whisk her away by saying just the right thing. And there is a doctor who is shocked by Jack’s abandonment of her patient, one of the Other Women with breast cancer. There are the first two wives, who run into each other thirty years after the first wife was replaced by the second wife, and there is the third wife, who is still married to Jack. Jack’s mother also speaks, at the beginning and the end. All Told tells more than the story of infidelity. It goes beyond the typical triangle of husband, wife, and lover. As the stories grow and the involvements become more interconnected and convoluted, the question of who is cheating on who and why becomes more difficult to answer. Each chapter reveals another secret. But every secret has two sides, and in some cases, even more than that.

About the author: KATHIE GIORGIO is the critically acclaimed author of five novels, two story collections, a collection of essays, two poetry chapbooks, and a full-length poetry bookGiorgio’s short stories and poems have appeared in countless literary magazines and anthologies. She’s been nominated in both fiction and poetry for the Pushcart Prize, the Write Well Award, the Million Writer Award, and for both fiction and poetry for the Best of the Net Anthology. Her novel The Home For Wayward Clocks won the 2011 Outstanding Achievement Award from the Wisconsin Library Association. Her novel In Grace’s Time was runner-up in fiction in the 2017 Maxy Award and the second place winner of the 2017 Silver Pen Award For Literary Excellence.  Her novel If You Tame Me just won second place in the Women’s Fiction category of the Pencraft Awards For Literary Excellence. Giorgio is the director/founder of AllWriters’ Workplace & Workshop. She lives in Waukesha, Wisconsin, with her husband, mystery writer Michael Giorgio, her daughter Olivia, who is writing her first novel, a neurotic dog named after Ursula LeGuin, a fat cat named Edgar Allen Paw, and a tiny cat named Muse.

No Matter Which Way You Look, There Is More to See (Paperback)

If You Tame Me (Paperback)

When You Finally Said No (Paperback)

Today's Moment of Happiness Despite the News: A Year of Spontaneous Essays (Paperback)