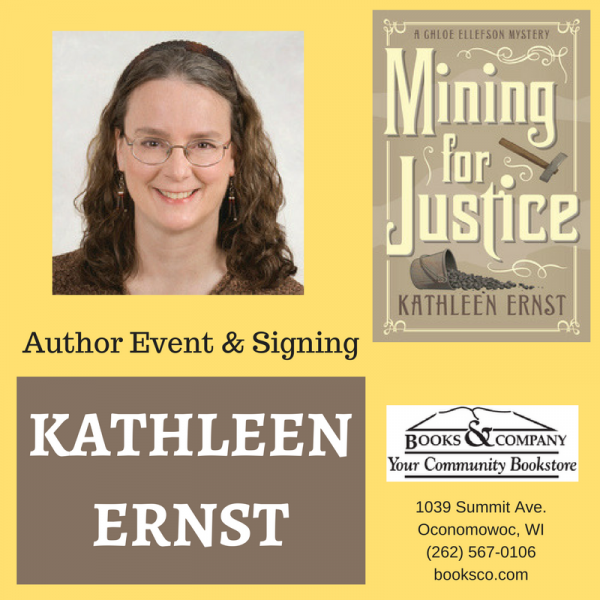 The much anticipated 8th in the historical mystery series set in Wisconsin featuring Chloe Ellefson is Mining For Justice. Chloe is excited to be learning about Wisconsin’s early Cornish immigrants and mining history while on temporary assignment at Pendarvis, a historic site in charming Mineral Point. But when her boyfriend, police officer Roelke McKenna, discovers long-buried human remains in the root cellar of an old Cornish cottage, Chloe reluctantly agrees to mine the historical record for answers. She soon finds herself in the center of a heated and deadly controversy that threatens to close Pendarvis. While struggling to help the historic site, Chloe must unearth dark secrets, past and present . . . before a killer comes to bury her.

Kathleen Ernst is an award-winning and bestselling author, educator, and social historian. She has published over thirty novels and two nonfiction books. Her books for young readers include the Caroline Abbott series for American Girl. Honors for her children's mysteries include Edgar and Agatha Award nominations. Kathleen worked as an Interpreter and Curator of Interpretation and Collections at Old World Wisconsin, and her time at the historic site served as inspiration for the Chloe Ellefson mysteries. The Heirloom Murders won the Anne Powers Fiction Book Award from the Council for Wisconsin Writers, and The Light Keeper's Legacy won the Lovey Award for Best Traditional Mystery from Love Is Murder. Ernst served as project director/scriptwriter for several instructional television series, one of which earned her an Emmy Award. She lives in Middleton, Wisconsin. For more information, visit her online at www.kathleenernst.com

A Settler's Year: Pioneer Life through the Seasons (Hardcover)

Gunpowder and Tea Cakes: My Journey with Felicity (Paperback)

Catch the Wind: My Journey with Caroline (Paperback)

Secrets in the Hills: A Josefina Mystery (Paperback)

This feature require that you enable JavaScript in your browser.
END_OF_DOCUMENT_TOKEN_TO_BE_REPLACED

This feature require that you enable JavaScript in your browser.
END_OF_DOCUMENT_TOKEN_TO_BE_REPLACED

This feature require that you enable JavaScript in your browser.
END_OF_DOCUMENT_TOKEN_TO_BE_REPLACED