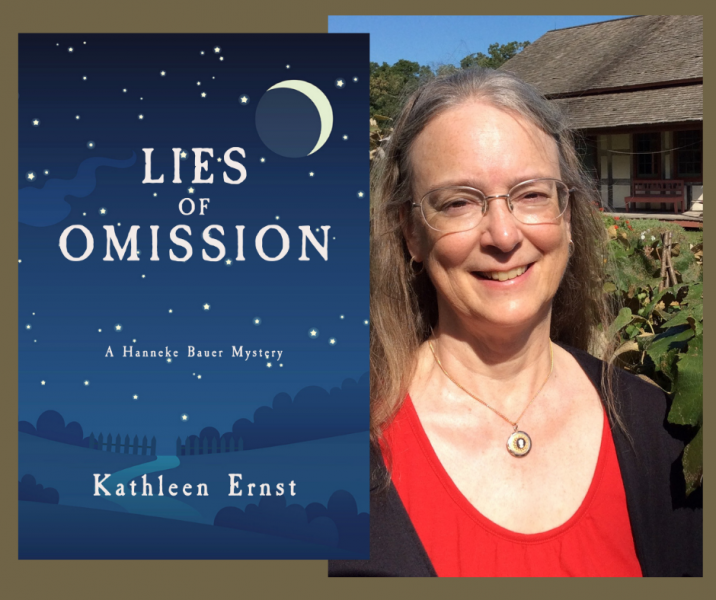 Please join us in welcoming author Kathleen Ernst back (virtually) to Books & Company! Kathleen will be discussing her newest book, the first in a new series featuring Hanneke Bauer, Lies of Omission.

About the book: When Pomeranian immigrant Hanneke Bauer reaches Wisconsin in 1855, she believes her dearest dreams are coming true. After reuniting with her husband Fridolin at his farm near Watertown, she will help create a true home. Instead, she receives the shocking news that he is dead. Hanneke quickly learns that Wisconsin life is not as bucolic as it seems. Alone and destitute, she is determined to discover the details of Fridolin’s death. Her efforts prompt animosity from his friends, anger the deputy sheriff, and entangle her in the rising tide of anti-immigrant sentiment. Finding herself in danger, Hanneke races to learn the truth about her husband’s secrets and lies…before a killer can silence her forever.

About the author: Kathleen Ernst is a social historian, educator, and bestselling author. Kathleen’s thirty-eight traditionally published books encompass mysteries, historical fiction, and non-fiction for adults and young readers. Her children’s mysteries include ten books for American Girl. Currently she writes the Chloe Ellefson Mysteries for adults about a museum curator whose knowledge of the past helps solve contemporary crimes.

​Kathleen lives in Middleton, Wisconsin, with her husband Scott (AKA “Mr. Ernst”) and feline muse Eliza Jane. Although Kathleen has called the Badger State home for nearly four decades, she grew up in Maryland, in a family that considered books as fundamental to life as food and water. She started writing as a child and never stopped. Today, she finds researching books as much fun as writing them, and loves meeting and hearing from readers most of all.

Balancing: Poems of the Female Immigrant Experience in the Upper Midwest, 1830-1930 (Paperback)

A Memory of Muskets (Paperback)

Death on the Prairie (Paperback)