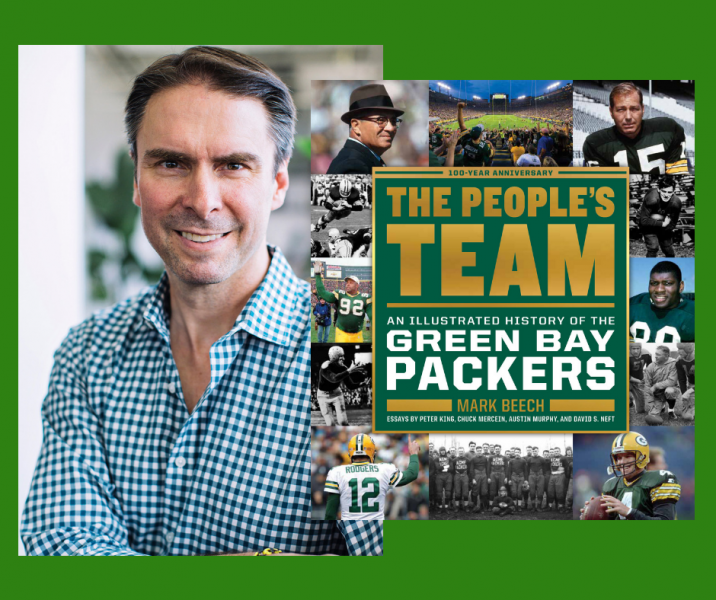 Join us for a fascinating event with Mark Beech, author of The People's Team: An Illustrated History of the Green Bay Packers!

The definitive, lavishly illustrated history of the Green Bay Packers, commemorating the team's 100-year anniversary! Not only are the Packers the only fan-owned team in any of North America's major pro sports leagues, but Green Bay -- population 104,057 -- is also the smallest city with a big-time franchise. The Packers are, in other words, unlikely candidates to be pro football's preeminent team. And yet nobody in the NFL has won more championships. The story of Titletown, USA, is the greatest story in sports. Through extensive archival research and unmatched insider access to players and team officials, past and present, Mark Beech tells the first complete rags-to-riches history of the Green Bay Packers, a full chronicle of the most illustrious team in NFL history. The People's Team paints compelling pictures of a franchise, a town, and a fan base. No other team in pro sports is so bound to the place that gave birth to it. Here is the story of the Packers and of Green Bay -- from the days of the French fur traders who settled on the shores of La Baie in the seventeenth century, to the team's pursuit of its fourteenth NFL championship. Featuring essays by Peter King, Chuck Mercein, Austin Murphy, and David S. Neft, The People's Team is a must-have for fans, old and new, and the definitive illustrated history of the most important team in the NFL.

Bookseller Katrina's father is an avid Green Bay Packer fan and even more of an avid reader. He read The People's Team: An Illustrated History of the Green Bay Packers by Mark Beech and was thoroughly impressed! This is what he had to say about it: "This book gave me lots of insight and new knowledge of each era of Packer history and the history of Green Bay itself. From how the Packers came from the divided Green Bay East and West high school football teams and united the town by getting the community behind them thus becoming the "people's team" to learning more about Curly Lambeau who started the team, led them to a championship, then to disaster, and then coached with Vince Lombardi. There was no sugarcoating either. Beech wrote about the good and the bad, so I read the bad parts fast and the good parts slowly to really savor the book. I enjoyed it so much and learned a lot!" What a glowing review!

MARK BEECH has been a senior editor at The Players' Tribune since 2016. Before that he spent 18 years at Sports Illustrated, covering a wide range of sports, including college football, horse racing, and NASCAR. A second-generation West Point graduate, he became a lifelong Packer fan after moving to Milwaukee in the mid-1980s. He lives with his family in Westchester County, New York, where in his free time he coaches flag football. This is his second book.

The People's Team: An Illustrated History of the Green Bay Packers (Hardcover)