MARK HEMBREE in conversation with JOHN SIEGER- In Person Event 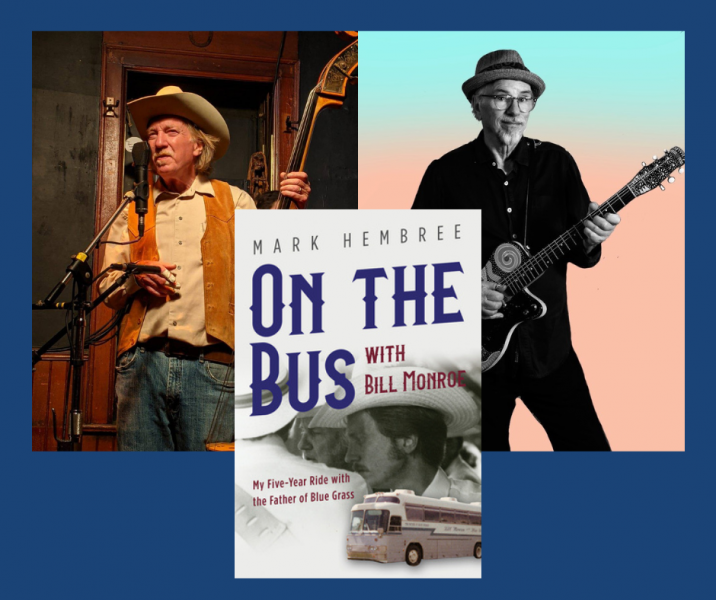 Local bassist and writer, Mark Hembree is joined by John Sieger for an in person conversation about his latest book, On the Bus with Bill Monroe: My Five-Year Ride with the Father of Bluegrass. John’s experience as a musician and writer will lead us in conversation with Mark on a behind the scenes journey into the world of bluegrass music with the bluegrass icon, Bill Monroe as the center of the journey. John and Mark will bring their instruments along for a taste of music.

Please register for this free event so we have a headcount for seating!

About the book:
A backstage audition led Mark Hembree into a five-year stint (1979-1984) as the bassist for Bill Monroe's Blue Grass Boys. Hembree's journey included playing at the White House and on the acclaimed album Master of Bluegrass. But it also put him on a collision course with the rigors of touring, the mysteries of Southern culture, and the complex personality of bandleader-legend Bill Monroe. Whether it's figuring out the best time for breakfast (early) or for beating the boss at poker (never), Hembree gives readers an up-close look at the occasionally exalting, often unglamorous life of a touring musician in the sometimes baffling, always colorful company of a bluegrass icon.

The amusing story of a Yankee fish out of water, On the Bus with Bill Monroe mixes memoir with storytelling to recount the adventures of a Northerner learning new ways and the Old South.

Mark Hembree is a bassist, vocalist, writer, and editor. From 1979 to 1984, Hembree worked for Bill Monroe as a Blue Grass Boy. He co-founded the Nashville Bluegrass Band in 1984 and was a member until 1988. He returned to Wisconsin and pursued a journalism career, but continued to play music with the Western Box Turtles, and most recently with the Western swing band, The Best Westerns, and his own bluegrass band, the Mark Hembree Band.

Songwriter, singer and guitarist John Sieger has a long resume. His band the R&B Cadets ruled the dance floors in Milwaukee in the 1980s. In the late 80’s his band Semi-Twang recorded for Warner Brothers Records. Both bands have regrouped in recent years and since then, Semi-Twang has released three more collections of his songs, most recently and ode to his hometown, “Kenosha.” “Sieger on Songs,” his column at UrbanMilwaukee.com, is John’s ongoing love letter to the music he digs.

On the Bus with Bill Monroe: My Five-Year Ride with the Father of Blue Grass (Music in American Life) (Paperback)