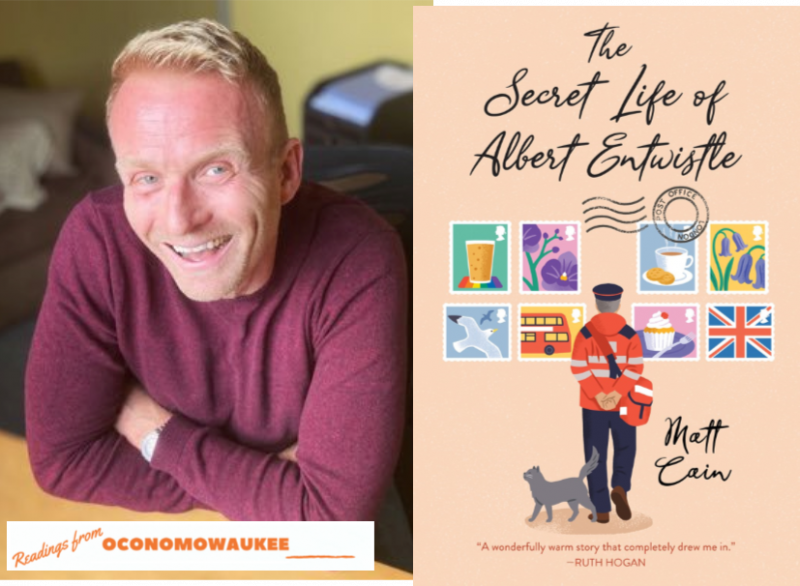 September’s Readings from Oconomowaukee is pleased to reach across the pond once again for an afternoon with British author Matt Cain and his latest novel, The Secret Life of Albert Entwistle. Perfect for fans of Fredrik Backman and TJ Klune, this humorous, life-affirming, and charmingly wise novel tells the story of how the forced retirement of a shy, closeted postman in northern England creates a second chance with his lost love, as he learns to embrace his true self, connect with his community, and finally experience his life’s great adventure.

Books & Company booksellers love this novel!   Bookseller Ken calls it "A hopeful novel about a closeted British postal worker who comes out when he's in his mid 60s and goes on a quest to find his long lost teen love." And bookseller Lizzy says it's perfect "For fans of All the Lonely People. Such a sweet story of friendship and found family. One of my new favorite books!"

About the book:
Every day, Albert Entwistle makes his way through the streets of his small English town, delivering letters and parcels and returning greetings with a quick wave and a "how do?" Everyone on his route knows Albert, or thinks they do--a man of quiet routines, content to live alone with his cat, Gracie.

Three months before his sixty-fifth birthday, Albert receives a letter from the Royal Mail thanking him for decades of service and stating that he is being forced into retirement. At once, Albert's simple life unravels. Without the work that fills his days, what will he do? He has no friends, family, or hobbies--just a past he never speaks of, and a lost love that fills him with regret. And so, rather than continue his lonely existence, Albert forms a brave plan to start truly living, to be honest about who he is . . . and to find George, the man with whom he spent one perfect spring and summer long ago.

One painful yet exhilarating step at a time, Albert begins searching for George and revealing his story to those around him. As he does, something extraordinary happens. Albert finds unlikely allies, new friends, and the courage to help others--even as he seeks the happiness he's always denied himself.

Beautifully written, funny, and wise, The Secret Life of Albert Entwistle is a book to fall in love with and to be inspired by, one that proves it is never too late to live, to hope, and to love.

A Note from Matt Cain, the author of The Secret Life of Albert Entwistle

"One of the things that inspired me to write this novel was all the joy I felt at seeing gay men like myself being embraced by British society. I think you'd be hard-pushed to find any other minority community in the UK that was as hated, feared and vilified as gay men were fifty years ago and is now as widely celebrated and loved. Acceptance of gay men has become a touchstone of British values within less than a decade, something that even the most optimistic commentators couldn't have predicted. I wanted to write a book that would celebrate this. And I sincerely hope The Secret Life of Albert Entwistle makes its readers feel good about themselves and the part they've played in bringing about this extraordinary social shift." -- Matt Cain

About the author:
Matt Cain is an author, a leading commentator on LGBT+ issues, and a former journalist. He was Channel 4's first Culture Editor, Editor-In-Chief of Attitude magazine, and has judged the Costa Prize, the Polari Prize and the South Bank Sky Arts Awards. He won Diversity in Media's Journalist Of the Year award in 2017 and is an ambassador for Manchester Pride and the Albert Kennedy Trust, plus a patron of LGBT+ History Month. Born in Bury and brought up in Bolton, he now lives in London and can be found online at MattCainWriter.com.

The Secret Life of Albert Entwistle: An Uplifting and Unforgettable Story of Love and Second Chances (Paperback)