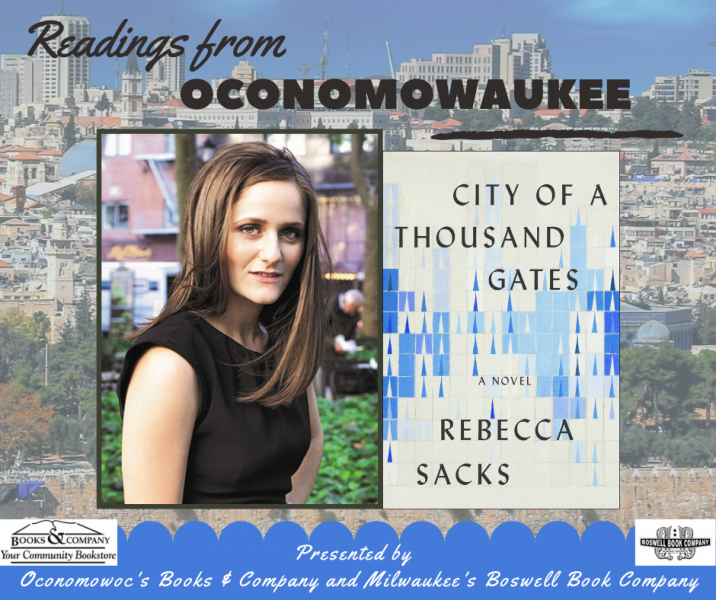 Order from Boswell Books or Books & Company for 20% off of the list price!

Join us for this lively conversation with debut novelist Rebecca Sacks in conversation with Boswell's Daniel Goldin and Books & Company's Lisa Baudoin for the February installment of Readings from Oconomowaukee!

Brave and bold, this gorgeously written novel introduces a large cast of characters from various backgrounds in a setting where violence is routine and where survival is defined by boundaries, walls, and checkpoints that force people to live and love within and across them. Hamid, a college student, has entered Israeli territory illegally for work. Rushing past soldiers, he bumps into Vera, a German journalist headed to Jerusalem to cover the story of Salem, a Palestinian boy beaten into a coma by a group of revenge-seeking Israeli teenagers. On her way to the hospital, Vera runs in front of a car that barely avoids hitting her. The driver is Ido, a new father traveling with his American wife and their baby. Ido is distracted by thoughts of a young Jewish girl murdered by a terrorist who infiltrated her settlement. Ori, a nineteen-year-old soldier from a nearby settlement, is guarding the checkpoint between Bethlehem and Jerusalem through which Samar--Hamid's professor--must pass. These multiple strands open this magnificent and haunting novel of present-day Israel and Palestine, following each of these diverse characters as they try to protect what they love. Their interwoven stories reveal complicated, painful truths about life in this conflicted land steeped in hope, love, hatred, terror, and blood on both sides. City of a Thousand Gates brilliantly evokes the universal drives that motivate these individuals to think and act as they do--desires for security, for freedom, for dignity, for the future of one's children, for land that each of us, no matter who or where we are, recognize and share.

REBECCA SACKS graduated from the Programs in Writing at the University of California, Irvine. In 2019, she received a Canada Council for the Arts grant, as well as the Joseph F. McCrindle Foundation's Henfield Prize for fiction. She has been awarded fellowships from the Bread Loaf Writers' Conference, the Juniper Summer Writing Institute and the Mellon-Sawyer Documenting War Seminar Series. After graduating from Dartmouth College, she worked for several years at Vanity Fair before moving to Israel, where she received a master's in Jewish Studies. Her dispatches from Tel Aviv and Jerusalem have been published in journals such as the Paris Review Daily. Rebecca Sacks is a citizen of Canada, the United States and Israel.

City of a Thousand Gates: A Novel (Hardcover)